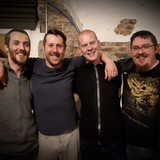 North of Fortitude are a four-piece band from Ireland’s Mid-West. They officially formed in 2019, however, the members had played together in different groups and on a more casual basis for many years previously. Lead vocalist Ronan Murphy is primarily influenced by electronic and dance music, while Rick O’Sullivan, guitarist and backing vocalist, grew up on the alternative rock of the 1990s as well as classic rock and hip hop. The other two members, bassist and backing vocalist Darragh Jennings, and drummer Peter Lynch, have their background in hard rock and metal. These eclectic influences are represented in the group’s sound which aims towards a fusion of genres with a focus on strong song-writing. North of Fortitude are currently focusing on song writing and perfecting their live performance. These will be promoted with live dates and promotional videos. North of Fortitude have had an instant chemistry since they began playing together in 2019,

they now have the task of capturing that energy they found in the studio before they can bring it to the stage. Stay tuned. ❤