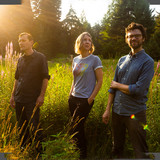 Constellation Myths is guitarist and bassist Josh Goldman, drummer and keyboardist Justin Kehoe, and vocalist Molly Seamans. Born out of the ash heap of a string of Boston-area indie bands, Constellation Myths is founded on the musical partnership of Goldman and Kehoe. The two long-time musical collaborators have developed an instinctive musical connection over two-decades of playing together as the rhythm section in half a dozen prior indie and post-rock bands. As the pair’s previous band began to wind down in 2019, falling prey to the usual vicissitudes of any aging band -- demanding jobs, growing families, members moving outside of the city, diverging goals or interests, and any number of things that make it harder to gather in the same room together -- Goldman and Kehoe began writing on their own, passing riffs and sketches back and forth over email. Building on the musical connection they’d established as a rhythm section since the late ‘90s, they quickly shifted their focus away from their traditional instruments, Goldman turning to the acoustic guitar and banjo, while Kehoe took up keys and mixing/arranging duties. Finally, Seamans was brought aboard to round out the band with her warm vocal melodies and ear for harmonies. Able to compose and record on their own outside of the practice space helped insulate Constellation Myths from the pressures that often cause bands to sputter and dissolve.