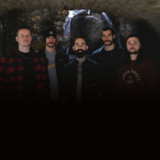 Pathfinders is a French Groove Metal band formed in 2018 in Fontainebleau. Their name comes from NASA’s space probe ‘Mars Pathfinder’ launch in December 1996, and the band’s universe is mainly inspired from this.   The band’s lineup has been the same since the band was created. Members were all part of metal bands when they got to know each other long before Pathfinders was created, and they have already shared the stage a few times due to their geographical proximity. Some members were endorsed by brands. So they all have good stage and music experience when creating Pathfinders.   Since its creation, Pathfinders has recorded an album consisting of 12 tracks released in April 2021 with the label 'Music Records’. It has the particularity of having been entirely 'homemade' (arrangement, recording, mixing, mastering). Lyrics are all in English.   Associated with Metalcore, Pathfinders stands out in the metal scene by the ecological and social sensitivity of their songs. Their music looks like bands Periphery, Lamb of God, or In Flames.   In 2020 they integrated the 'Team Nowhere' community (with famous French bands like LANDMVRKS, Enhancer, AqMe, Pleymo, Bukowski...) create in order to promote Rock / Metal music by bringing together bands and all music professions to help each other. They also signed with the French independent label 'Music Records'.   Pictures : 1 - logo 2 - Jérémy Barthélémy 3 - Romain Gaucher 4 - Clément Levy 5 - Jérémy Gaucher 6 - Ben Daguet