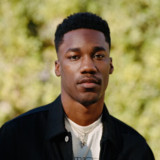 Anyone can be an artist, but very few can be remarkable. For Giveon —a rising music artist who has a brilliant gift of capturing moods into songs like no other— his biggest fear is being like everyone else. Though he shouldn’t be concerned. From his captivating baritone voice to his pensive lyrics and colorful soundscape, Giveon defies not only musical standards, but expectations on how he should be as an artist and a man, as well. “I want them to take away originality and I want to them say ‘ok, this is something different, this is not like what we know,’” he said. Though he always had an affinity for music, Giveon said he fell in love with the art of songwriting before he did with singing. As a child, he would write short stories, just to write, and as he got older, he switched over to poems, because he didn’t think anyone would want to read a long story. Eventually that led to rap, but everyone was doing that and Giveon wasn’t like the rest. It wasn’t until he discovered that his baritone voice wasn’t as awkward or ugly as he thought —because after all Frank Sinatra was one— that everything came together for him.