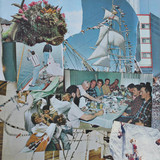 The Canadian trio Loving play sparse, intimate songs that rarely rise above a bedroom whisper while still containing enough pop hooks to lodge their deceptively slight songs deep in the listener's memory bank. The melancholy sweetness of their debut self-titled EP won them a devoted fan base, and their 2020 album If I Am Only My Thoughts built on that with fuller, warmer arrangements.

David Parry and brothers Jesse and Lucas Henderson started recording music together in 2015, sharing instrumental, singing, and writing duties and operating as a long-distance project since some of them were based in Victoria, British Columbia, and some were in Toronto. The sparse, gently psychedelic folk sounds they came up with were reminiscent of classic British folk, alternative singer/songwriters like Elliott Smith, and lo-fi bands like Smog from the '90s. Their initial sessions spawned a self-titled EP, which was issued in late 2016 by Human Sounds Records. The homemade, supremely relaxed sound of the EP proved to be very popular with patrons of various streaming services, racking up impressive numbers. This success inspired the trio to become a full-time band and establish their home base in Victoria. They spent time on nearby Gabriola Island in the Hendersons' family home demoing new songs, then moved to Parry's basement studio to record the songs direct to tape. The resulting album, If I Am Only My Thoughts, added new sonic elements like chorus pedals, slide guitar, and string sections without ruining the cozy home-cooked feel established by the EP. It was issued in early 2020 by Last Gang Records, and the band played a series of live shows in support of it with the addition of drummer Keenan Mittag-Degala. ~ Tim Sendra, Rovi