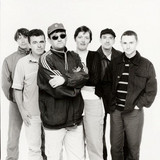 Following the disbandment of the British indie pop group the Housemartins in 1989, vocalist Paul Heaton and drummer David Hemmingway formed the Beautiful South. Where their previous group relied on jazzy guitars and witty, wry lyrics, the Beautiful South boasted a more sophisticated, jazzy pop sound, layered with keyboards, R&B-inflected female backing vocals and, occasionally, light orchestrations. Often, the group's relaxed, catchy songs contradicted the sarcastic, cynical thrust of the lyrics. Nevertheless, the band's pleasant arrangements often tempered whatever bitterness there was in Heaton's lyrics, and that's part of the reason why the Beautiful South became quite popular within its native Britain during the '90s. Though the group never found a niche in America -- by the middle of the decade, their records weren't even being released in the U.S. -- their string of melodic jazz-pop singles made them one of the most successful, if one of the least flashy, bands in Britain. Their popularity was confirmed by the astonishing success of their 1994 singles compilation, Carry on Up the Charts, which became one of the biggest-selling albums in British history. Heaton and Hemmingway formed the Beautiful South immediately after the breakup of the Housemartins, who were one of the most popular and well-reviewed British guitar pop bands of the mid-'80s. The Housemartins had earned a reputation for being somewhat downbeat Northerners, so the duo chose the name Beautiful South sarcastically. To complete the lineup, the pair hired former Anthill Runaways vocalist Briana Corrigan, bassist Sean Welch, drummer David Stead (formerly a Housemartins roadie), and guitarist David Rotheray, who became Heaton's new collaborator. In the summer of 1989, they released their first single, "Song for Whoever," on the Housemartins' old record label, Go!. "Song for Whoever" climbed to number two, while its follow-up "You Keep It All In" peaked at number eight in September, 1989. A month later, the group's debut, Welcome to the Beautiful South, was released to positive reviews. "A Little Time," the first single from the group's second album, Choke, became the group's first number one single in the fall of 1990. Choke was also well-received, even though it didn't quite match the performance of the debut, either in terms of sales or reviews. In particular, some critics complained that Heaton was becoming too clever and cynical for his own good. The Beautiful South released their third album, 0898, in 1992; it was their first record not to be released in the United States, yet it maintained their success in Britain. Following the release of 0898, Corrigan left the group, reportedly upset over some of Heaton's ironic lyrics. She was replaced with Jacqui Abbot, who made her first appearance on the band's fourth album, 1994's Miaow. While both 0898 and Miaow were popular, they were only moderate successes. Their respectable chart performances in no way prepared any observers, including the band themselves, for the blockbuster success of Carry on Up the Charts, a greatest-hits collection released at the end of 1994. Carry on Up the Charts entered the charts at number one. It was one of the fastest-selling albums in U.K. history and its success outlasted the Christmas season. The album stayed at number one for several months, going platinum many times over and, in the process, becoming one of the most popular albums in British history. Its success was a bit of a surprise, since the popularity of the Beautiful South's previous albums never indicated the across-the-boards success that greeted Carry on Up the Charts. The album wasn't released in America until late 1995, after it broke several U.K. records. The Beautiful South released their follow-up to Miaow, Blue Is the Colour, in the fall of 1996. Quench followed three years later, then Painting It Red in fall 2000, and Gaze in 2003. ~ Stephen Thomas Erlewine, Rovi