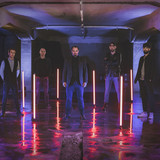 Gion Stump & The Lighthouse Project are back with their fourth studio album, "A Penny for the Fool", leaving behind the darkness they explored on the previous album "Holy Darkness". "A Penny for the Fool" searches for the boundaries between life and death, this world and the next, and finds itself somewhere between heaven and hell - on earth, in the midst of life. Amidst the chaos of the world, the protagonists long for order and explanations. Once again, the band from eastern Switzerland has succeeded in creating a diverse album with profound and humorous lyrics that appeals to lovers of both quiet, intimate and loud, bombastic sounds. Emotional, intimate piano parts alternate with crashing drums, energetic synthesizers and lush riffs. Always present are the band's flair for big melodies and Gion Stump's narrative lyrics. The cleverly used string sounds by Dave Eggar and Cameron Lugo (Coldplay, Evanescence, Beck) also provide soothingly warm moments. The album was recorded in 2020/2021 at Powerplay Studios (Maur, CH), the band's own The Lighthouse (St. Gallen, CH) and Hat Creek Recording Studios (Tennessee, USA). In collaboration with Marc Carolan (Muse, The Cure, Snow Patrol), Dave Hofmann (Egopusher, Leech) and Randy Merrill (Paul McCartney, Lady Gaga, Muse), an album was created with many big songs, but also with intimate sounds. The visual concept of the new album is provided by the long-time band director Sandro Horber and the Parisian photographer Marilyn Mugot.