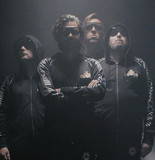 DATAROCK's is one of Norway's most internationally active & acclaimed bands. Their 1000 shows in 36 countries - all in red tracksuit -

include 20 tours in the US, 8 tours i Australia, and festivals such as Coachella, Lollapalooza, Reading & Leeds, Meredith Music Festival, Falls Festival, Summer Sonic, Hurricane, Roskilde and Sónar. Their debut came in as #36 on NME's albums of the year, 'Computer Camp Love' made #88 on Rolling Stone Magazine's songs of the year - plus #12 on Australia's Hottest 100 - Spin Magazine listed 'See What I Care' as an "essential download of the summer", their second album 'RED' was critic's choice of the week in NY Times - and both their first albums were nominated for Norwegian Grammies. Now their ready to unleash their heavily anticipated third studio album - 'Face the Brutality' - March 9.