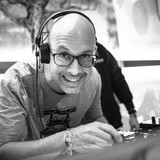 Check also my new project: Sitaranha Working as a DJ and musician since 1993 he's been spinning acidizing rhythms and kicked the crowd with exhausting psychedelic trance music. Consequent grooves with kickin' melodies shaped his sets on European dancefloors. Successful with techno and ambient releases in the mid 90's, he's additionally been working as a reporter and photographer for German music magazines like Frontpage, X-Mag, Loop and others. Over the years Dense used to organize several techno and trance events in Germany (D'vents). In 2008 he refined his striking style of performing progressive ambient music. Luckily he took his ability to play the right music at the right time from the dancefloor to the chill out floor. Meanwhile Dense is one of the most popular ambient DJs in Germany - performing chillgressive style. Beside deejaying and after broadcasting the 6 a.m. Saturday morning chillout radio show on Trancefan Radio for years, since 2010 his homebase is Chromanova.fm, based in Berlin. He's responsible for the program on the Chromanova.fm Chillout and Ambient Radio stream where you can catch him exclusively on Sundays with his weekly four hour radio show "Chill On!", what is part and parcel of ambient music scene by now and supported by all important chill out labels... Check also these playlists: Cosmicleaf Records ✨ Чиллаут / Эмбиент / Электроника / Транс / ДаунтемпоPsychill Blossom 🌸 Псайчил / псайбиент / Psybient