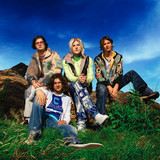 Sundara Karma are a four-piece alt pop band made up of Oscar Pollock, Haydn Evans, Ally Baty & Dom Cordell. The band released their debut album ‘Youth is Only Ever Fun in Retrospect’ in early 2017 and has since established themselves as one of the UK’s most exciting new bands. In 2019, with the release of their sophomore record ‘Ulfilas’ Alphabet’, the band took their audience in an unexpected but creatively rewarding direction. Fusing together glam-rock, synth-pop, progressive-rock & psychedelia whilst at the same time espousing lyrics contemplating death and spiritual awakening. The record was widely critically acclaimed and alongside their hugely impressive live show it set them apart as one of the most original and fearless bands currently coming out of the UK.