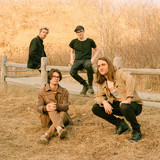 Passport Radio is a Toronto-based four-piece Garage Rock band formed in 2016. Composed of lead singer and guitarist Alex Fecioru, lead guitarist Devon Pelley, bassist Aidyn Kiddie and drummer Aaron Weiss, each member brings their own musical taste and influences to every song. Bands such as Interpol and The Strokes are among many of the artists that have shaped Passport Radio’s sound. During the Coronavirus pandemic, the band went back into the studio to record their newest single, “Moving On”. Recorded in Toronto's Banquet Sound Studio with ‘Hollerado's’ Nixon Boyd, the new song is the band's third release since their debut EP “Downtown” (2016). The new single was released on March 27th 2021, after "Lighthouse" (April 2020) and “Dirty Hands” (February 2020). Passport Radio has also sold-out multiple Toronto venues including The Rivoli and the Garrison, as well as having performed with international acts such as Hot Flash Heat Wave, ISLAND, Say Sue Me and Mourn; making waves in the music scene.