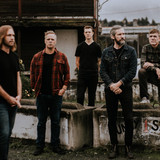 Seattle combo Emery rose to national success in the mid-2000s, combining an alternative pop/rock foundation with elements of screamo, melodic hardcore, and overt Christian themes. Settling in with prominent indie label Tooth & Nail, the band released a series of respected albums that traversed Billboard's pop and Christian charts, with 2009's highlight ...In Shallow Seas We Sail, topping the latter. See-sawing back and forth between their softer pop and heavier post-hardcore styles, Emery later struck out on their own with albums like 2015's You Were Never Alone and 2018's Eve, which appeared on their own BadChristian imprint. Formed in South Carolina in 2001, the band originally included the talents of recent college graduates Toby Morrell (vocals, guitar), Matt Carter (guitar), Joel Green (bass), Devin Shelton (guitar), Josh Head (keyboards), and Seth Studley (drums). After weighing their options, Emery's members decided that Seattle would be a better environment for a burgeoning band, prompting the group to move westward in September 2001. Once established in the Emerald City, Emery signed with the Seattle-based Tooth & Nail label, which united them with producer/engineer Ed Rose for the creation of the band's debut album. The Weak's End appeared in January 2004, followed by The Question in August 2005. Drummer Seth Studley left before the latter album's release, however, prompting the group to enlist Dave Powell as his replacement. One year later, bassist Joel Green also left the band, although the bandmates opted to relegate bass duties to guitarists Morrell and Shelton rather than admit a new member. I'm Only a Man arrived in 2007 and signaled a new direction for the band, whose newfound use of synthesizers and increasingly melodic singing contrasted with the harsher sounds of Emery's previous work. One year later, however, the musicians reverted to their original sound with the While Broken Hearts Prevail EP, while 2009's ...In Shallow Seas We Sail proved to be a mix of both styles. In 2011, the band parted ways with guitarist Devin Shelton, but managed to soldier on without him, releasing the heavier We Do What We Want later that year. In the late summer of 2013, they issued an eponymous recording on their own BadChristian music label. You Were Never Alone, the group's sixth studio album and second outing for BadChristian, arrived in 2015, followed by the crowd-funded Revival: Emery Classics Reimagined in 2017. Returning in 2018, Emery offered up their thoughtful and melodic seventh outing, Eve. ~ Alex Henderson, Rovi