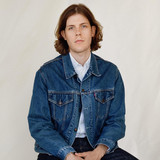 The Norwegian native, Ole Kirkeng, spent five years in the United States and began to hone his craft at Berklee College of Music. During his time there, he engulfed himself in the surrounding creative community. Influential sound technician Susan Rogers, who worked with Prince during most of the 80s, became a close mentor and showed him the ropes.

After his time in college, Kirkeng headed to Brooklyn, eager to once again dive into a new music scene. He went from stage to stage across the city, guitar on his back, ready to perform while making important human connections along the way. He earned a spot in Courtney Marie Andrews band and even earned a spot as support for Molly Tuttle. That time in New York City helped Ole keep art, and those who love art, constantly in his orbit. In Dec. 2019, he headed to Øyvind Røsrud’s cozy Brageveien Studio in Oslo to start work on a new EP. A place Kirkeng describes as “an underground oasis graced with vintage instruments and synthesizers everywhere you turn,” the studio created the perfect environment for creative growth. With the help of Røsrud and an assortment of incredible talent, including label-mates Live Miranda Solberg, aka Louien and Tor Egil Kreken of Darling West. Lead single “Double Shift” is warm and inviting, a toast to those who keep a positive mind and keep pushing forward.