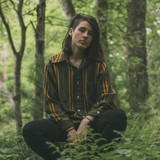 Gianna Botticelli, better known by her stage name GHOST GRL, is an Indie/Ambient artist from Boston, MA. Combining her expressive vocals with soft and haunting melodies, GHOST GRL creates songs that are both somber and uplifting. A self taught guitarist, she began writing music at the age of 14 and has since released 3 studio albums; Settle, Home and Rewired. Recently, GHOST GRL was nominated for two Boston Music Awards (2019); Vocalist of the year and New artist of the year.