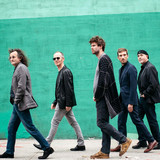 The Gloaming is a contemporary Irish/American music group formed in 2011 comprising fiddle player Martin Hayes, guitarist Dennis Cahill, vocalist Iarla Ó Lionáird, fiddle player Caoimhín Ó Raghallaigh, and pianist and producer Thomas Bartlett (aka Doveman). They have recorded three studio albums, The Gloaming (2014), The Gloaming (2) (2016), The Gloaming 3 (2019), and a concert recording, Live at the NCH (2018). The group has been credited with an original retake on the vernacular of traditional Irish music through a modern prism via elements of post-rock, jazz, contemporary classical, chamber, and minimalism. Lyricist Ó Lionáird often uses motifs, poetic verse and whole songs from the ancient Irish canon, with some lyrics dating back centuries. The Gloaming's music has been described as a genre of its own while also drawing comparisons with diverse acts such as Sigur Ros, Brian Eno, Arvo Part, Buena Vista Social Club, Tortoise, Steve Reich, and Seán Ó Riada.The Gloaming are signed to Real World Records, whose founder, musician Peter Gabriel, described them as “a wonderful mix of soulful and passionate talents who have created their own genre”. In the US, their music is released through Aaron and Bryce Dessner’s Brassland Records, home of The National.