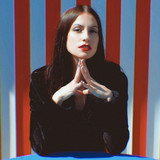 Syd Silvair conjures up a world where disco meets modern witchcraft, where divination occurs atop a lush palette of danceable art-pop. Refinery29 asks, "Are you ready to have a spell cast on you?" They describe her sound as "late 70's pop" with vocals that "ring clear as a bell," over a throwback sonic landscape which serves as a benchmark to her intrigue. Like a dark descendant of Stevie Nicks, Syd Silvair raises the spirit of 1970’s escapism with her debut EP, Reverie. Tarot-reader by day, Syd is endlessly inspired by the rich visual narratives of the deck, and the ways in which their divine messages manifest in our physical realm. Each track on Reverie captures the essence of a specific tarot card, weaving wisdom from the card’s meaning into the lyrics and mood of the song.