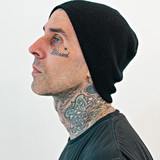 Travis Barker is an American musician and producer who has sold millions of records with his bands blink-182, Transplants, +44, and as a solo artist.

Called one of the greatest drummers of all time, Barker has since established himself as an incredibly versatile drummer, producing and making guest appearances in music projects of numerous music genres including hip-hop, alternative rock, pop, and country. Barker’s numerous solo collaborations have included Yelawolf, The Game, Lil Wayne, Tom Morello, Cypress Hill, Ludacris, RZA, Slash, Steve Aoki, DJ AM, Kid Cudi, Ty Dolla $ign, Prayers, Kid Ink, ANTEMASQUE and many many others. Aside from drumming and producing, he founded the clothing company/lifestyle brand Famous Stars and Straps in 1999. Companies such as DC and Zildjan cymbals have co-designed products in his name.