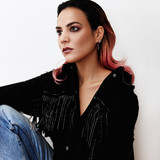 Dutch songstress Mingue is a truehearted artist with a love for pop, dance and house music. She’s a versatile writer that loves to work with producers from all over the world. Mingue set off as a much-requested featured vocalist and writer after releasing ‘Missing (feat. Mingue)’ with the Swiss EDX and ‘Riverbank' with producer Bolier on Spinnin' Records. The world of house welcomed Mingue’s bright voice, and so came about collaborations with more and more hitmakers. Recent and upcoming releases include collaborations with Lizot, Dj Jerome, Charlott Boss, French Canadian Rapper Adamo, Anthony Keyrouz, Lanné, Moguai, Lucky Luke, Paradigm and many others on labels such as Spinnin’ Records, Soave, Armada, Chill Your Mind and Sony Germany. In 2020 Mingue was voted best FHM vocalist by fans of Future House Music and recorded a masterclass ‘How to record that hit song’ for the FHM producers program. A collabo with the Turkish Faruk Sabanci resulted in a dark deep house track with tropical middle eastern influences. 'Your Call' charted top ten on Russian radio and collected over a million Shazams.   Mingue’s latest single is called ‘Perfect Dance’ and is out now on Chill Your Mind.   www.mingueofficial.com