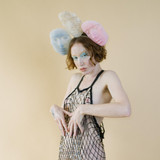 Singer, songwriter, and visual artist vōx (Latin for “voice,” pronounced “wokes”) approaches all of her projects holistically—creating an engaging and thought-provoking audio-visual world where viewers and listeners can feel safe and find power in vulnerability. As a teenager, vōx turned to songwriting as an escape from her small, conservative town. Years later, it became a therapeutic vehicle—helping the Los Angeles-based artist confront years of trauma and transform shame into strength. Drawing comparisons to such pioneering artists as Björk, Kate Bush, and Tori Amos, vōx recorded her debut EP, I Was Born, alongside co-producer Josiah Kosier in 2017. Soon after, she signed to Arts & Crafts and followed with 2019’s I Am Not a God and 2020’s This Body—both of which she co-produced with Alexander Vincent. Inspired by the human experience, This Body is perhaps the most complete manifestation of vōx’s creative and spiritual evolution thus far—on an emotional, philosophical, and physical level. The five-song EP, which has drawn praise from the likes of Billboard, Paper, and Dazed, showcases vōx’s captivating voice and thoughtful words—accompanied by sparse, electronic notes, ethereal beats, and gentle, multi-tracked harmonies. The songs include an anthem for self-worth (“Be Bigger”), a confrontation of ancestral trauma (“How Do I Connect to the Spirits?”), and the title track, in which vōx reclaims her body with the formidable lyrics, “You were not here first. I was.”