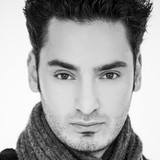 Ros is a multi-award-winning film composer, multi-nominated songwriter, orchestrator, conductor and music producer. Ros' musical journey started at just five years old, when he was accepted to the renown Gnessin Music School for the musically gifted, as a violinist. A successful career as a violinist followed, which saw him perform across three continents and later become second leader of the European Philharmonic Orchestra. In 2004, a sudden hand-injury forced him to give up his promising violin career. It was then, when he reinvented himself as a composer, conductor and music producer. Ros went on to study at the world-famous University of Music in Vienna as well as at the prestigious Royal College of Music, earning his Bachelor’s Degree in Classical Composition and his Master's degree in Composition for Screen. During his music career Ros had multiple appearances on national TV and radio, such as BBC (UK), ABC (Australia), Kanal 1 (Bulgaria), ORF (Austria) and has been featured in national press (BBC Music Magazine, Economy). His work as a composer and songwriter has earned him several awards (such as the Audience Award for Best Music at the "British Animation Film Festival") and several industry nominations (such as the "American Songwriting Awards"). As a conductor Ros has worked with renown orchestras such as the Macedonian Symphonic Orchestra, The Prague Metropolitan Orchestra and many others.