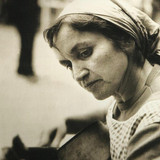 Daughter of a music teacher and a singer/guitarist, Violeta Parra was influenced by her parents since being a child. At the age of nine, the young girl started singing and playing guitar, soon composing traditional Chilean music. After getting married to Luis Cereceda in 1952, the singer/songwriter began touring the country, assimilating the natural charm of her native land, which mostly inspired her work. In 1954, Violeta Parra moved to Europe, deciding to settle down in France, where the artist started recording her poetic songs. When returning to Chile in 1958, Violeta Parra got involved in painting and sculpture, extending her artistic skills even more. In 1961, the singer returned to Europe, this time singing along with her daughter Isabel Parra and her son Angel Parra being responsible for keeping their mother's legacy alive. ~ Drago Bonacich, Rovi