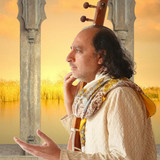 Manish Vyas from Gujarat. India has been learning and teaching music since his youth, which he learnt through the years with different pandits (maestros) he met along the way in India.

He is teacher, composer, singer, multi-instrumentalist and publisher of his own work. Besides being a composer and singer, he plays Tabla and Indian percussion, Santoor, Harmonium, Keyboard. Along his musical and spiritual path, he has composed hundreds of songs, mainly in the devotional, mystical and Sufi genres. He has released 20 albums of his own composition, from Mantras to Sufi, dance, easy-listening and instrumental based on Indian Ragas. His music offers the perfect blend of Indian genuine sounds merged with a touch of fusion, which makes his music so accessible and appreciated by all type of listeners from east and west, in search of authentic Indian soulful sounds. Manish gives concerts and workshops and he currently lives in Switzerland, offering his live music mainly in Europe, USA and India - where he conducts concerts as well as meditation retreats. Having been the coordinator of a big spiritual school in South India, his retreats are thought to bring people in silence thru music and practices from India keeping the authenticity of these traditions when shared in the west.