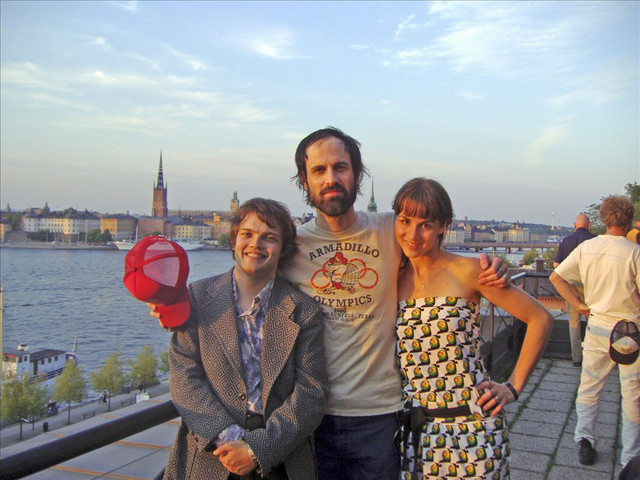 A beautiful mess of indie rock, country-rock and lo-fi with lyrics both witty and profound, the Silver Jews were formed in 1989 by writer/musician David Berman with his friends, guitarist/singer Stephen Malkmus and drummer Bob Nastanovich. The trio performed together as Ectoslavia when they studied at the University of Virginia; after graduation, they moved to New York and shared an apartment. Dubbing themselves the Silver Jews -- after the Silver Apples, the Silver Beatles, and slang for blonde-haired Jewish people -- they played noisy, often improvised songs, mostly for the sheer enjoyment they got out of playing together after a hard day's work. At the time, Berman and Malkmus were guards at an art museum and Nastanovich was a bus driver. After work, they would record songs into people's answering machines, but even after the band's sonics improved, the basic idea of friends playing together in a spontaneous way became the Silver Jews' trademark style. Before moving to New York but after finishing his studies, Malkmus founded Pavement with his childhood friend Scott Kannberg. As Pavement's acclaim and visibility grew, the notion arose that the Silver Jews were a "Pavement side-project," despite the fact that Berman's writing, singing, and guitar playing led the band's music. On the band's initial recordings, Berman tried to protect the Jews' individuality, listing Malkmus and Nastanovich under aliases, but it backfired when people learned who "Hazel Figurine" and "Bobby N." really were. The notion of the Jews as a side project was only reaffirmed when Nastanovich joined Pavement as a second drummer (to supplement the duties of Gary Young, their then-current, unpredictable drummer) before the release of the group's debut album, Slanted and Enchanted (which was named after a cartoon that Berman created). Steve West, another college friend, played drums for both bands, first for the Silver Jews on Dime Map of the Reef, and on all of Pavement's releases after Watery, Domestic. However, the Jews' sometimes frustrating "Pavement connection" did bring some important attention to the band: Dan Koretsky, founder of the Chicago-based indie label Drag City, met Berman at a Pavement show. When he heard of the Jews' tapes, Koretsky offered to release them. On their first EPs for the label, 1990's Dime Map of the Reef and 1993's The Arizona Record, the band held to their ultra lo-fi aesthetic and recorded the majority of both on a walkman. After the release of the EPs, Berman entered a graduate-level writing program at the University of Massachusetts and met like-minded members of local bands, the indie/country hybrid Scud Mountain Boys and New Radiant Storm King. Writing and teaching at the university left Berman time for songwriting; soon, he had enough material for an album, which became 1994's Starlite Walker. The album reunited Berman with Malkmus and Nastanovich (this time listed by their real names in the credits) in the 24-track Easley Recording studios for a more focused, polished take on the Silver Jews' literate, lyrical, country and noise-inspired rock. Along with writing and working with other performers like the War Comet and Silver Palace, Berman recorded the Jews' third album, The Natural Bridge, in the summer of 1996 with members of New Radiant Storm King and Drag City artist/producer Rian Murphy. Originally, Berman planned to record this album with Malkmus, Nastanovich, and the Scud Mountain Boys, but both sessions were scrapped after a few days. The Natural Bridge continued to streamline the Silver Jews' sound and let Berman's rich, abstract lyrics and reflective vocals take center stage. Malkmus returned for 1998's American Water, and his guitar and vocal interplay with Berman made it some of the Silver Jews' best work. The following year, Berman's first collection of poetry, the critically acclaimed Actual Air, was published by Open City Press. The Silver Jews returned in 2001 with Tennessee, which also featured Berman's wife Cassie on a few tracks. After struggling with depression and substance abuse, Berman resurrected the Jews -- which, this time around, included Cassie, Malkmus, Nastanovich, Will Oldham, and Azita Youseffi among many others -- in early 2005 for a new album. Recorded in Nashville, Tanglewood Numbers narrowly avoided being destroyed in the electrical fire that engulfed Memphis' historic Easley-McCain studio, where it was supposed to be mastered. Drag City released the album that fall. In 2008, Berman released the relatively upbeat Lookout Mountain, Lookout Sea, but the following year he retired the Silver Jews banner and was largely walked away from music; though he was a reluctant live performer as a musician, Berman occasionally did readings of his short stories, poems in both the U.S. and the U.K. In July 2019, Berman returned to music with the release of the self-titled debut album from a new project, Purple Mountains. Less than a month later, Berman died on August 7, 2019; he was 52 years old. ~ Heather Phares, Rovi