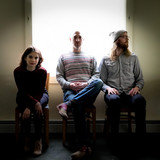 Builder of the House

"Collecting scraps of folk and indie pop persuasiveness, they channel an introspective undercurrent that gathers momentum with each passing second." –– Paste Magazine –– Utilizing various strains of folk music Builder of the House welcome their listeners in from the cold digital world to enjoy a warm potpourri of all-embracing indie pop.​ Comprised of Rob Cimitile and Elliot Heeschen, the Northeast folk pop duo had released two EPs – I Am a Tidal Wave (2012), Hourglass (sonaBLAST! Records 2015) when their live act began to pick up steam with opening slots for Pearl and the Beard & Dylan Leblanc. The duo gained features on Reverbnation, SoundCloud, and CD Baby’s DIY Musician blog. Their music videos have been written about by Paste Magazine, Consequence of Sound, and We All Want Someone to Shout For. Their music videos have also been venerated on the international festival circuit with several nominations and 1st place honors for Best Music Video at MOVE Music Festival and Idyllwild International Festival of Cinema.​ The band recently released their first full length album, Ornaments. The detailed arrangements and production nuances were overseen by Cimitile who is prone to sweat the details in every aspect of the release. Ornaments already has a stellar music video to complement its release in “Look at the Man” which draws attention to gender identity issues while conjuring up the kindred vibes of Feist, Timber Timbre, Lumineers & Fleet Foxes.