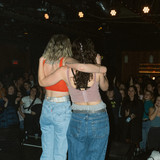 Heartstreets (HS), which is composed of Gab Godon and Emma Beko, started as a childhood friendship that organically blossomed through their love of dance and 90s hip­hop. Born in Budapest being half Peruvian, Emma Beko grew up in Montreal and got most of her rap influence from living in New York. Gab Godon was born and raised in Montreal and listened to a lot of 90s R&B. After a night of wine and impromptu freestyle Heartstreets was born. Based in Montreal, the girls have spent the past few years working on their craft and performing throughout the city. After releasing a string of critically acclaimed singles, they released their first EP titled You and I, in May 2016. An ode to love and all the emotions and adventures you can go through when you are close to someone. The EP tells the story of love at first sight turned into a dramatic ending. The title track ‘Cruising With You’ produced by Soulection Da­P is a summer anthem that gathered over 2millions streams on Spotify. Following the success of the EP they were invited to share the stage with the likes of Gallant, The Internet, Daniel Caesar, Charlotte Cardin, Busty and the Bass and Dead Obies just to name a few.