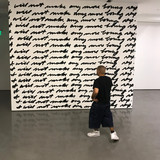 Shirt is a multiform conceptual artist from Queens, New York––with a lens focused on everyday people and common things. Exploring issues of daily life and public discourse, his themes extend to political and cultural issues, especially as they affect those that have been historically discriminated against, disenfranchised, and disappeared. Recently, the artist has come to think of his work as a response to questions posed to him as a youth: What can art achieve? Who gets to be called an artist? Dropping out of high school in 2001, in 2016, Shirt was accepted into a Master of Fine Art program at the Academy of Art & Design in Basel, Switzerland without having any previous undergrad degree. Living in the region for nearly three years, Shirt held multiple exhibitions and shows in cities around Europe. In 2018, the independent label Third Man Records announced they would release a new Shirt album that he recorded at school titled Pure Beauty. The album’s vinyl packaging was made in collaboration with John Baldessari featuring the conceptual artist's 1968 work of the same name. Moving back to the states in 2019, at the top of 2020 Shirt debuted a new work at The Royal College of Art in London for their writing/performance symposium before flying back to New York. Written and recorded over several months in quarantine, a new album "We’re Still Alive" marks the 10-year musical follow up to the Tan-Face Children EP made with Darvin Silva and released independently in 2010.