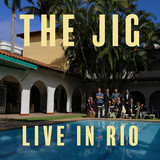 The Jig is an 8-piece funk team from Amsterdam that performs hot original works. It is one of few real funk groups, an instrumental groove machine with a rock & roll-attitude, known for its powerful and exhilarating live shows. The music is up-to-date and personal, adding elements of soul, afro, jazz and rock & roll to the music that derives from heroes like Bootsy Collins, Tower of Power, James Brown, Average White Band and The Meters. Since 2009 the band has been propagating its infectiously original funk with growing success, playing around 200 gigs all over Holland, in Germany, Spain, Belgium, France, the U.S. and Brazil. In 2011 The Jig released its well-received debut album Brooklyn Blowout, which was recorded in New York. In 2013 more funk stompers found their way to an audience by way of the album Aargh! In the fall of 2015 the single The One was released, a biting banger with for the first time – denying all the bands principles – a singer: Mr. Ruben. In may they released the second single Come Get It, again with Mr. Ruben, followed by the full studio album Proximo Disco in june 2016. Since then Mr. Ruben is a regular guest at the shows of The Jig. To celebrate the tenth anniversary of the band, a live album is released in 2020: The Jig Live in Rio, recorded in Brazil in front of twenty thousand people. As always, The Jig is continuously working on new songs, making every live show a unique experience, as you can now also hear on their latest album.