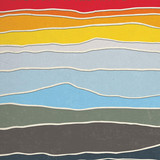 When Carly Gibson and BJ Wilbanks first began collaborating musically, something truly magical took place as they began writing together. The result is borne in their debut album, Gibson Wilbanks, which releases to the world on Friday, November 8, 2019.  A graduate from Atlanta Institute of Music’s acclaimed guitar program, Carly Gibson is what you would call a triple threat for her prowess as a guitarist, songwriter and vocalist. Currently, Carly gives solo performances, is guitarist and vocalist with local alt rock band The Pussywillows, and is one of two backing vocalists with funk rock legends Mothers Finest.  Georgia born BJ Wilbanks is a prolific and extremely talented songwriter/producer. He creates music that fuses the roots of Americana, Motown, Funk, Blues, & Country into an intoxicating blend that is all his own. Critics and fans have referred to his style as “Back Porch Soul.” His 2017 self-titled album received high acclaim by American Songwriter, All Music, and many other major music outlets. His genuine sound and success as an artist lead to him performing shows with music legends Gladys Knight, Drivin N Cryin, and Mother’s Finest. Together as Gibson Wilbanks, they have combined their songwriting and musical skills to create a unique sound that is all it’s own which is fully embodied on their debut album releasing this November 2019.