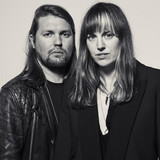 Since 2009, Band Of Skulls have released five acclaimed studio albums and have built a reputation as a phenomenal live act, both at home and in the US, where they have performed on the Late Show With David Letterman and Late Night with Seth Meyers. They have toured with luminaries like Muse, Red Hot Chili Peppers, Queens Of The Stone Age and Black Keys among others, as well as touring the globe as a headline act. After originally making a name for themselves as two thirds of the anthemic British rock outfit Band Of Skulls, emerging duo Marsden & Richardson are now looking to focus on a far more atmospheric direction. While Band Of Skulls are known for enormous riffs and blistering pace, Marsden & Richardson are looking to take their new project on a warm and more captivating journey. Russell Marsden and Emma Richardson first started writing songs together in their teens after meeting at school in their Southampton hometown. Forming Band of Skulls 17 years ago with drummer Matt Hayward, they went on to make five acclaimed studio albums together. Now, the pair have temporarily stepped away from Band of Skulls to focus on a new musical project they’ve been dreaming about since their earliest songwriting days. Unlike their heavier Band of Skulls repertoire, Marsden & Richardson is far more stripped-down, string laden and personal, allowing fans to clearly hear the duo’s soaring, melodic harmonies alongside lush orchestration and a more personal, emotive style of songwriting.