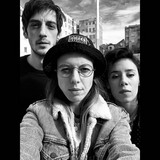 NEW VIDEO - Kroz vetar: youtu.be/qAZ_0EbxO0s New album 'Prazan prostor među nama koji može i da ne postoji' was released on 20th November 2020 on Moonlee Records. Repetitor is a garage rock/post-punk trio from Belgrade, Serbia. They are, without doubt, one of the most exciting live bands in Europe. Repetitor have appeared on club and festival stages all around Europe (Sziget, Exit, Pohoda, Rock For People...), and even played in China and Russia. All their 3 albums have gained critical acclaim throughout the continent. Repetitor faithfully carved their signature sound, a blend of heavy rock'n'roll, post-punk and everything in between. The listener is thundered by a high-voltage wall of sound, bursts of rage, fear, violence, pain and anxiety. On one side, we have Boris psychotically grinding his guitar strings and shredding chords with a punk attitude, soon to twist them into hurricane heavy riffs. On other side, there's playful and bouncy Ana-Marija, fused with her bass guitar working on cooking a post-punk balm. All of this is glued together by the untamable beast on drums, Milena, bittery drumming away like if it's the end of time. In the noisy range of their guitar-based rock echoes The Stooges, Nirvana, Sonic Youth – however, Repetitor are so genuine and unique that you can describe their music just by saying »Repetitor«. Together with Savages, Metz, Thee Oh Sess, Fat White Family, they are plunging on the transversal of the most dangerous rock bands of the moment.