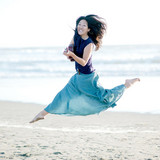 Singer, songwriter, and instrumentalist Cynthia Lin has enjoyed a diverse career that has seen her embrace folk, blues, jazz, and standards, while also teaching others how to make the most of their talents. Originally from Chicago, Lin became interested in music at an early age, and studied violin and piano as a child. She also studied hula dancing for a spell, and her teacher gifted her with a ukulele when she displayed an interest in the instrument. When Lin graduated from high school, she received a guitar as a gift, and during her college years at Princeton University, she began writing songs. Lin received a degree in economics and landed a job with a software firm in Washington D.C.; however, it wasn't long before she decided the corporate world was a poor fit for her, and she started to pursue a career in the arts. While studying acting, Lin found herself writing songs on the guitar during downtime backstage, and she soon began performing at local coffeehouses. Equally influenced by jazz vocalists such as Ella Fitzgerald and singer/songwriters in the mold of Joni Mitchell, Lin dubbed her style "acoustic folk jazz," and in 2005 she released an independent EP of her songs, Blue and Borderlined. By the time Lin released her next project in 2007, a seven-song EP called Doppelganger, she had relocated to New York City, and was regularly touring the country playing her songs. For her third release, 2010's Microscope, Lin took control of the technical as well as the musical side of the project, serving as her own producer, engineer, and mixer. Near the end of the year, Lin released the first of what would become a series of seasonal digital singles, an interpretation of Vince Guaraldi and Lee Mendelson's "Christmas Time Is Here." In 2011, Lin began rediscovering the ukulele, and she released a digital single of "That's All," accompanying herself on the uke. By 2014, Lin had relocated to San Francisco and formed a band, the Blue Moon All Stars, who backed her as she sang and strummed the ukulele. Playing both originals and standards, Lin and her group became a fixture in San Francisco and their fame began to spread across the country, especially as a new interest in the uke bloomed among musicians. In 2017, Lin released an album celebrating her favorite instrument, Ukulele Days; she also gave uke and vocal lessons, both in person and via Skype, with Lin encouraging her students to embrace creativity as a means of personal expression. ~ Mark Deming, Rovi