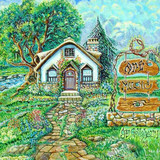 In addition to playing for millions in his time there, he appeared on hundreds of radio and TV shows touring both for the park and on his own throughout the U.S. and Europe. In the late 80's he met and soon married Janice Webster, a singer-songwriter/fine artist from California, and the two performed together for almost 30 years. It was Jan who envisioned a village called Withe & Stone, and they fictionally placed ourselves there to present her art and their music.