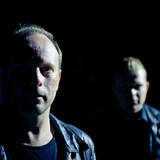 Brotherhood was born on a dark winter night in November 2007. The mutual respect for artists like The Sisters of Mercy, Joy Division and The Cure was the catalyst for Stefan Eriksson and Micke Lönngren to form Brotherhood. Tired of the modern interpretations they decided to form a band that would stick to the roots of Goth - dark, deep, melancholic and epic soundscapes with chorus bass, sweeping synthesizers and melodic guitars in play.   The bands debut album ”Turn The Gold To Chrome” (2012) was nominated for several awards and received fantastic reviews. 2013 Brotherhood recorded four songs about life and death, love and hate and how to set free and let go - “The Dark EP”. In 2014 Brotherhood worked hard at their own Spider Studio to bring their special version of Goth to the next level and released “The Other Side Of Fear EP” (2015). During 2016 the band returned with the singles “Like A Ghost” and “Heaven and The End”. 2017 Brotherhood released the single “Damned”, the compilation ”Two Worlds And In Between” and again returned with a new sound - ”Until Every Tear Is Wiped Away” - a double A-side single with influences from electronica and dark americana. The band also released the single “Shadows”. The amazing “In The Violet Hour” was released by PostGothic Records in 2019 and the band also released the single “More” that deals with the frustration of death and addiction. All Brotherhood covers have been created by the amazing artist and painter Sackarias Luhanko.