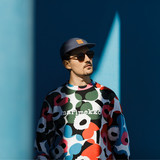 Misha is a Finnish producer. He lives in Helsinki and has roots in Ukraine. In May 2018 he released his producer debut Feel through Chillhop Music – one of the leading tastemakers in the instrumental hip-hop scene. After a couple of releases via Chillhop Music, Misha followed up with his debut EP named Midnight Sun, which was very well received in the beat scene and made it to the EP Top 5 on BBC Radio 1Xtra. 10M+ streams and support from Jamz Supernova and Okayplayer means he’s one to keep your eyes on. In July 2021 Misha released his new EP called Gusto featuring numerous vocalists and musicians from around the world.  📷: Pirita Männikkö / Joni Lindroos   https://www.mishabeats.com/