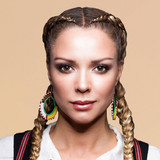 Anna Sahlene is a pop singer and actress from Sweden. Born in Söderhamn in 1976, she was just 11 years old when she first tasted fame on the popular children's television show The Children of Bullerbyn. She later moved to Stockholm to embark on a singing career, joining the band Rhythm Avenue in 1997. The group disbanded after just one year, and Sahlene started taking work as a backing vocalist for singers such as Robyn, Carola, and Charlotte Nilsson. Sahlene appeared on-stage with Nilsson at the 1999 Eurovision song contest, singing backup on Nilsson's winning entry, "Take Me to Your Heaven." In 2000 she released her first solo single, "The Little Voice," which picked up significant airplay throughout Scandinavia. It was later covered by Hilary Duff. Two further singles, "House" and "Fishies," were also successful, but when Sahlene's record company went bankrupt, her debut album, The Fifth Element, was shelved. Sahlene's fortunes changed in 2002 when she was enlisted at the last moment to return to the Eurovision song contest, this time as an entrant herself. The Estonian singer Ines had dropped out at the last moment, so Sahlene, despite not being Estonian, was called to represent the country with Ines' song "Runaway." Her energetic performance was highly regarded as one of the standouts of the night, and she finished in third place. "Runaway" went on to become a big hit, in Sweden and across Europe. The following year she competed in the Swedish Eurovision heats with "We're Unbreakable," another upbeat pop song with a similar structure to "Runaway." She did not qualify for the finals, but the song was a hit and she finally released her debut album, aptly titled It's Been a While. The album included "Runaway," "We're Unbreakable," and her early hits "The Little Voice" and "House." In addition to success in Europe, the album was a surprise hit in Japan, thanks to heavy airplay for "We're Unbreakable." In 2005 Photograph was released, sporting a more soulful, piano-based sound. Lead single "The Creeps" saw Anna back in the Swedish charts, and "Photograph" was another modest international success. In 2006 Sahlene competed once again in Melodifestivalen, with the disco-tinged "This Woman." Once again she failed to qualify for the grand finals, but "This Woman" still became her highest-charting Swedish release to date. After a busy 2006 that also included competing on the hugely popular Swedish TV show Let's Dance, Sahlene took much of the next year out of the spotlight to raise her first child, Lily. ~ John Lucas, Rovi