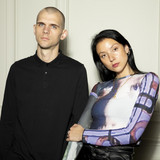 Australian duo ALTA (Hannah Lesser and Julius Dowson) – serve up ‘Push’, another slice of their forthcoming debut album Reasons which is scheduled for release on Friday 22 November through Soothsayer. Vinyl preorder: https://www.wearealta.com/shop/altavinylpreorder ‘Push’ is an energetic and relatable track about the effects of reading the wrong signals. It explores the constantly shifting power dynamics of modern dating, posing the question - do emotional games serve to entice, or undermine you? ‘Push’ follows on from previous singles ‘Figured Out’, ‘Back On It’ and ‘Twisted’, which have nearly breached 2 million streams on Spotify since their release (in August last year) and are receiving global attention, with spins on BBC Radio 1 and praise from the likes of The Line of Best Fit and CLASH. ALTA hit the ground running in 2018 supporting Eden, and Jungle on sold out Australian tours, performed a stellar set at Splendour In The Grass and released two glossy underground hits ‘Figured Out’ and ‘Now You Want Me’. A huge 2017 saw the pair release ‘Fix It’ and ‘Sentiment’, share stages with ABRA, Wiki and Kilter, and play a series of high intensity sets including Sugar Mountain, Let Them Eat Cake, and their own headline national tour.