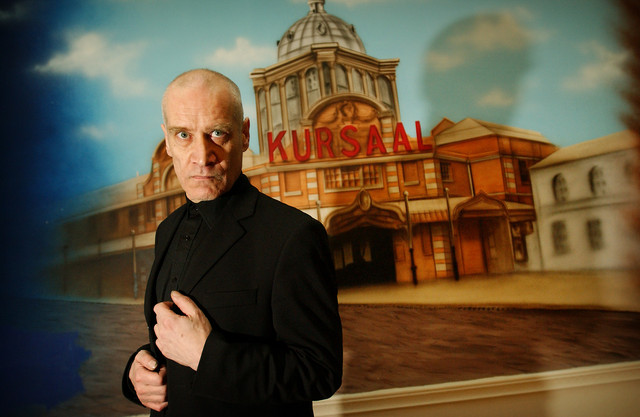 Best known as the guitarist in Dr. Feelgood, one of British pub rock's greatest bands, Wilko Johnson went on to a long solo career playing the kind of rootsy, R&B-based rock & roll he loved. Born John Wilkinson (which he inverted to come up with his stage name) in 1947, Johnson grew up in the coastal Canvey Island area, and played around the local music scene during the '60s (often in jug bands). He studied at Newcastle University beginning in 1967, but returned home during breaks to keep up his musical activities. In 1971, after returning from a trip to India, he joined the band that became Dr. Feelgood, and quickly became one of their focal points thanks to his maniacally intense stage presence. Dr. Feelgood played locally for a couple of years and made their debut in London in the summer of 1973; their distinctively scruffy image and menacing energy soon made them a hot commodity on the pub rock circuit. The band released its debut album, Down by the Jetty, in 1975; Johnson stayed for two more studio albums (Malpractice and Sneakin' Suspicion) and the chart-topping live document Stupidity, contributing a number of fine original songs. However, tensions between Johnson and the rest of the group led to his departure toward the end of 1977. Johnson soon formed a backing band called the Solid Senders, which featured keyboardist John Potter, bassist Steve Lewins, and drummer Alan Platt. They signed to Virgin in 1978 and released the LP Solid Senders that year. The following year, Johnson joined Ian Dury's Blockheads, where he remained until 1980; there he met bassist Norman Watt-Roy, who later became a regular collaborator. In early 1981, Johnson released his second album, Ice on the Motorway, and two years later issued the EP Bottle Up and Go! with Lew Lewis; several small-scale LPs, mostly for European labels, followed over the '80s: 1984's Pull the Cover, 1985's Watch Out!, 1987's Call It What You Want, and 1988's Barbed Wire Blues. The latter was the first recording with his new regular group, the Wilko Johnson Band, featuring Watt-Roy and drummer Salvatore Ramundo. Ramundo was replaced in 1988 by Steve Monti (ex-Curve) for the Barbed Wire Blues tour and remained in the band -- which toured almost literally nonstop throughout Europe and Japan for the next decade -- until he tired of touring and was replaced by ex-BlockheadDylan Howe. Johnson finally had the opportunity to release another album, Going Back Home for Mystic. There has been renewed interest in Johnson's career in the 21st century, due largely to director Julien Temple's Oil City Confidential, a documentary about Dr. Feelgood and Johnson. The film appeared on the festival circuit, where it drew rave reviews, as did the soundtrack. As a result, two volumes of The Best of Wilko Johnson were released in 2010, as well as a remastered reissue of Barbed Wire Blues. Following a 2011 tour on which he supported the Stranglers, 2012 saw Johnson publish his autobiography, Looking Back on Me. In early 2013, Johnson was diagnosed with pancreatic cancer and announced that his televised performance on the show Madness Live: Goodbye Television Centre would be his last. However, the summer brought impromptu live appearances with Watt-Roy and Howe in Essex, and by the end of that November he had recorded an album of re-interpretations of material from his back catalog in collaboration with the Who's Roger Daltrey. Ahead of the release of Going Back Home -- not to be confused with the aforementioned Mystic album of the same title -- Johnson performed it in its entirety with Daltrey at a packed Shepherd's Bush Empire in London toward the end of February 2014. ~ Steve Huey, Rovi