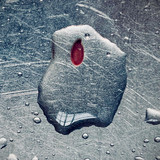 Is it new wave in the year 2021? Is it postpunk? Cold wave rebirth? Synthpop with fuzz-guitar? Or Rammstein meets DAF for a cup of tea? Myes … This is: EL/NeUe In 1987, Norwegian trio EL released their EP "Et hvilested". To some, this 7" vinyl record is still one of their favourites from the ‘80s. Others did not enjoy it. In 2020, EL returned as EL/NeUe, considerably older, but still vital and exploring, more electronic, darker and heavier than in the old days. EL appeared on several compilation cassettes in the 80s, and played a few, memorable concerts. In 2009, the compilation CD "Maskindans", presenting Norwegian synth from the 80s, was released, including one EL track; "Visshet". Later, in 2014, the song Og Tilslutt- a track from EL’s first demo tape (1985), was included on the compilation LP Domestic Landscape (Subterranean Synth-Wave Compilation) from Spain’s Domestica Records. In 2016, EL returned to the stage for an exclusive reunion concert at Mir (Oslo). EL/NeUe is Håkon Johnson (guitar, bass, synth) and Askild Hagen (vocals, synth, bass). They have both worked in comedy in recent years, as writers for Norway’s popular weekly show Nytt På Nytt (NRK), and with several music/comedy projects, notably Oslo International Playback Free Jazz Festival (OIPFJF). Askild has also released several albums as Adrian Cox- both as a solo artist and together with the mystical duo 'lys assia': adrian cox & 'lys assia'. New album: "KRANK". More info: www.kampenkontor.no