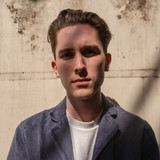 Eric Spike is a singer/songwriter, performer & producer! His first single “The Boy” featured on BBC introducing as well as his Selena Gomez “Lose You To Love Me” remix played numerous times on Scott Mills Party Anthems on BBC Radio 1 including Kiss FM. In Summer 2020 his Lady GagaRain On Me (with Ariana Grande) remix blew up & supported massively, by "Steve Wright in The Afternoon, Serious Jockin' show" on BBC Radio 2 (also featured on Radio 1, Kiss FM & Gaydio!) Eric’s tracks are being played in clubs across the UK; he continues to perform his music everywhere & anywhere he can! Playing festivals, pride events such as Leeds, London, York.   Continuing to progress with his production & writing. Whilst creating songs for other musicians. Most recently Eric’s music caught the attention of Don Diablo which quickly led to him releasing his first record ERIC SPIKE FREEFALL with Don's label "HEXAGON". You can listen to his latest songs "We've Got Us" & "Dark Nights" now! Eric Spike Radio   Be sure to follow this lad!!