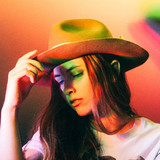 Brought up among the Blue Ridge Mountains in a bizarre four-person evangelical cult, Maddi Mae found her own salvation in songwriting. She got her start as a five-year-old country gospel guitarist/singer/songwriter and spent a dozen years putting her “God-given gifts” to good use in valley churches. Home abuse turned to teenage homelessness, and Maddi spent the next decade in a near constant state of shock, unravelling years of brain-washing and trauma. With no god, no kinfolk, and no answers, she turned back to songwriting. For Maddi, songwriting is prayer – but these prayers answer themselves. A decade into making her living off of music alone, Maddi Mae has played well over 400 shows – solo and as a member of psychedelic and folk rock bands. In September 2020, she released her debut six-song record called Quiet Corners, recorded with Kyle Millers of the band Tow’rs. From music blog Two Story Melody: “Amid Maddi Mae’s succulent vocals and the infectious, simplistic artistry of the song’s folk tone, the most compelling aspect of “Here Right Now” is its sheer confidence. “Here Right Now” exemplifies a brutal honesty and proud transparency that begs for a spot alongside [Julia] Jacklin on Spotify’s “Badass Women” playlist. [The song] rests at the corner of persuasive rhetoric and equally compelling melodies— it’s an utterly powerful track.”