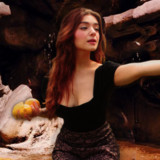 An emerging new voice in indie music, Sophia Bella Cucci is a New York-area musician with a dance and theater background. She spent her childhood and teen years immersed in musical theater, ballet, and ballroom dancing, but balanced her classical training by listening to artists which have since influenced her own music, including Paramore, Led Zeppelin, Billie Eilish, David Bowie, Mazzy Star, and Fleetwood Mac. Sophia’s music combines the nostalgic sounds she loves with modern production elements and lyrics that belie the fact that she has only been writing songs for a year.