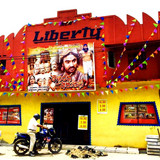 Active for around 8 years since forming after a chance meeting in a cosmetic surgeon’s waiting room in the West End’s expensive Harley Street district. Sometimes there are up to 30 members working on a Soap Company project, sometimes just one. Their own musical output ranges from zingy Art Pop to the most teeth-baringly malevolent Techno with a rash of colourful and progressive styles filling the in-between, all given a prod and a nod just to see if they can stretch their ethic. A proud eclecticism being a vital key to their appeal. Various art, broadcasting, DJ sets and film projects that accompany the sounds which are all released under their own ‘Space Station Disco’ imprint, are all to found on the outfit’s all-encompassing website… http://the-soap.co