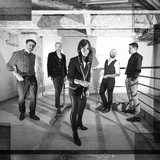 After 10 years of a galvanizing folk-rock, Grand March takes a new direction of a more raw rock, still distinguished, elegant and melodic: a sure return to the sources of the genre and a renewed energy thanks to the arrival of new musicians that share the same attention to detail and the desire to electrify the scene. In its new compositions, Grand March digs its rock instinct and throws out polished riffs around the deeper voice of the singer, who continues and goes deeper in her harmonic experimentations. The 4th record in preparation spells out the time of the completion and comes out now to the rhythm of a few singles released throughout the coming months, to make the pleasure last. Full uncovering: late 2021! « Novels », the band’s debut EP, was released in 2010. The album « One Crowded Hour… » was released in 2014 (# 14 Records / www.diese14.com). « Growing Old » is the band’s new EP (6 tracks), to be released early 2017 on # 14 Records (www.diese14.com). All Grand March songs are available on all download platforms and can be streamed on http://grandmarch.bandcamp.com. Chronicles, photos and videos are published on the band’s website: www.grandmarch.fr The band members : Hélène Braeuner – Lead Vocals François Bogatto – Guitar Kévin Konrath – Bass Antoine Thépot – Keyboards Fred Lichtenberger – Drums