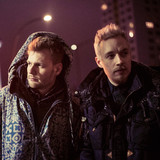 Alexander and Sebastian come from a production background, having worked with many well-known artists and done sound design projects that have been used by big brands like BMW or Mercedes, athletics, fashion labels and many, many more. Now they are focusing on their artist project Steam Phunk and have built a strong fan base, with releases on the iTunes charts and this is just the beginning. The two brothers live in Berlin and have been making music together since they discovered how well they complement each other in songwriting. Alexander and Sebastian were born and raised in Hamburg, Germany, where they have already performed on stage and toured the world with other artists. Thanks to their catchy melodies and danceable drops, Steam Phunk has collaborated with various artists around the world and can be heard on radio stations and official Spotify playlists in several countries. Steam Phunk has received support from some of the biggest names in the scene, including R3hab, Tiesto, Oliver Heldens and many more. As for the future, big collaborations, remixes and releases are already in the works and can't wait to be played at upcoming gigs!