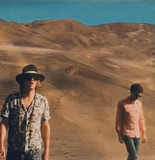 Vox Eagle are an Electro Psych Pop Duo residing in the rocky mountains of Colorado. Formed in 2016 the band immediately started exciting listeners ears with their own exciting blend of infectious psychedelic electro pop. Their first EP flamingo Paradiso delved into tropical psychedelia with lead single No Sleep gathering spins around the globe. 2018 saw the release of their multifarious mix tape Trium Avium followed by some touring. 2019 saw Vox Eagle focusing on recording new material and only played a handful of. shows the last being Mesa Fest Arizona. With a swag of new material set for release in 2020 Vox Eagle is look forward to hitting the road this summer to play a bunch of live shows hopefully in a city near you, so stay tuned!