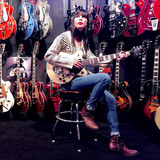 Nena Anderson’s blues-tinged Americana is birthed from heartaches and hope, and the life experiences that we all have in common. Her songs console with an “I’ve been there too” feeling, while reminding us that we will all get through it. Her velvet voice is soulful and intimate, always leaving you wanting more, with melodies that you can’t get out of your head. Many bands, music genres, touring and collaborations since she began, Nena has landed right where she is supposed to be, with new songs that nod to her many influences while being completely her own. "Lonesome Nights" is a three-song live EP exploring a rockin' honky-tonk sound... "like if The Pretenders met Emmylou Harris."

The tracks are an evolution of her previous album, "Beyond the Lights," with distinctive Americana songs with rock and classic country influences. In addition to her solo band, Nena fronts the acclaimed country band, Brawley, and performs as featured vocalist of the jazz combo, Jetset. She is also a member of the collaborative album/concert project, For The Sender, and spent several years touring with Johnny Cash Tribute, Cash’d Out, as June Carter Cash. She has shared stages with such diverse artists as Lucinda Williams, Gregg Allman, Dan Hicks, and Cindy Lee Berryhill.