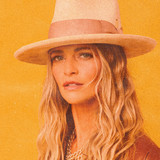 Her southern charm, discerning sense of style, and alluring spunk will quickly draw you in, but it’s Lindsay James’ infectious energy, unwavering faith, and relatability – all of which she weaves into her music – that will make you fall in love with the Houston, TX native. Raised in a musical family and surrounded by ‘90s country, James quietly listened and learned, waiting to share her talent until her early teen years. In 2017, James moved to Nashville and began honing her songwriting craft and building the foundation for her artistry. Drawing from influences like Sheryl Crow, Mariah Carey, George Strait, Stevie Wonder and Selena, James established her sound: a fresh mix of Country, R&B and Soul. With a sound that radiates honesty and authenticity, James will release her sunny new single “Behind” on July 2, a track that reminds us all to leave the things that don’t matter in the past. Written by Jared Scott, Lindsay James, Sam Martinez, Luke Preston and produced by Daniel Ross, the new release layers James’ sultry vocals over breezy production for the perfect song of the summer.