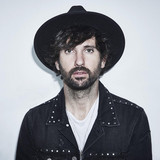 David Otero is a famous singer, guitarist and composer, born in Madrid (Spain) on the 17th April 1980. He was one of the main members (as composer and guitarist) of the most relevant Spanish pop band of the first decade of the 21st century “El Canto del Loco”. The band broke up in 2010 after ten years together. David then started his solo career as “El Pescao”, releasing his first solo album: “Nada Lógico” (2010). After a 3 year long tour, he released a special edition named “Un viaje nada lógico” (2011), followed by an EP titled “Ciao Pescao” (2012). In October 2014 “Ultramar” was released: eleven eclectic songs composed in Buenos Aires and recorded in London. This album led to extensive touring in Spain and Latin America. In 2017, David took a decisive turn in his career and left his former alias “El Pescao”, presenting himself as “David Otero” and publishing an homonymous album: “David Otero”. In 2018, David released a new album called “1980”. This album includes the song Baile, which counted with the collaboration of Rozalén and has amounted to more than 20.000.000 streams. Another song of the album, Precipicio al Mar, would eventually lead to David’s first book, published with the song’s name. David starts 2020 with a new and ambitious project: an album that will revisit the most emblematic songs of his career, from El Canto del Loco to his latest compositions. Most of the songs will benefit from the collaboration of many well-known Spanish artists.