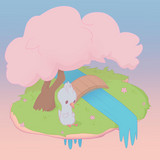 Kaguu is a Two Piece band from Mexico and The US, that started as an online project between guitarist, Rafa De La Garza, and drummer Nick Acker, in early 2017. The bands first two EP's, Hawkridge & Wistful were written, recorded, and produced completely online without ever meeting in person. That changed in late 2018 with the making of Kaguu's live album, Red Sun Sessions (Live), and then later in 2019 with the bands first tour happening over in the UK with two major highlights being Radar Festival and ArcTanGent. Musically, Kaguu can be described as Progressive Rock, Math Rock, Cinematic music, and maybe something in between. That being said, the band has it's own distinct sound that seems to allow an equally shared admiration of Nintendo game soundtracks, to show through as inspirations. "Rosewood", the band's newest release (May 29th, 2020), will be the first full piece of music written by the band in person, between trips to Mexico and the US respectively. It is also the culmination of Kaguu's experience playing as a live band for the first time and growing together as a result.