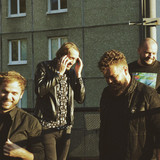 "An awesome expressive instrumental rock band. I love them. I need their music." - Kevin Cole, KEXP "Post-rock, experimental, shoegaze, prog-rock - they do it so well! An excellent band." - Vic Galloway, BBC Radio "Ethereal and gentle one minute, dark and chaotic the next; here’s a band to stand next to Red Sparrows, Explosions in the Sky and Mogwai in depth and extremity." - Clash Starting back in 2008 as more of a bedroom project in a tiny flat in Bratislava, a place full of different kinds of instruments which they first picked up in what had to be just a little break in a gaming session on playstation, The Ills soon became a regular band. The Ills are being put into a post-rock box, however it is also shoegaze and elements of math-rock and prog-rock that can be heard in their songs. They are definitely most characterized by their live performances where their musical skills, intense atmosphere combined with intimate parts meet with punk attitude and almost hardcore drive.